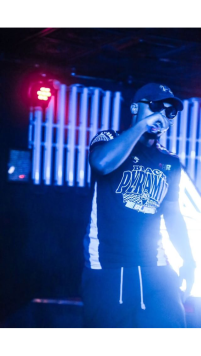 Many of the featured artists on this website all have very unique, noteworthy traits which make them the creatives that they are. This new series we’ve entitled “#MeetTheArtistMondays” is designed to give listeners a closer, behind the scenes look into some of the dope underground artists we have come to love. Our first spotlight artist for this series is one who has built up quite the hype for himself with his distinctive, wild, in your face style, Zero The God.

With his crazy wordplay, aggressive delivery and insane ability to dominate on any beat he jumps on, Zero The God is a Massachusetts born, Virginia raised artist who is really beginning to make quite the name for himself in the 757 area. What is quite noteworthy about this artist is the fact that he gained his buzz without any major endorsements from any platform but from just pure talent and hard work. His aggressive, hard to ignore,  sound is another interesting feature that sets the artist apart; a great example of this delivery is on his “Look At Me” cover he did for the “Virginia Is For Ragers” collective mixtape (check it out here) Recently we got a chance to catch up with the artist and he answered some of our questions we had about his rap career, the underground scene and more. Check out what he had to say below.

Where are you from – Born in New Bedford Massachusetts, Raised in Norfolk Virginia
When and How did you discover that you had a passion for music?- I’ve Always had an Ear for music along as instruments from being in Drum Clubs and Drumlines throughout School. My Father also influenced me by always bumping Old School Artist such as Rakim, Krs One and Biggie around the house when i was a kid. But i began to write and record music when i connected with a friend back in 9th grade.
Who do you consider to be your biggest influences? – Biggest Music influences right now have to be Ski mask TheslumpGod & Asap Ferg . For the simple reason of Energy ! Being Explosive and all in there face ! Not scared to be original, Out there and Wild. Not to mention their amazing Lyrical ability
What has been the hardest thing for you to overcome as a creative? I’ve always had the passion, Funds use to be the only thing holding me back. But then i learned to invest
What do you think is your biggest accomplishment thus far?  Being apart of the Robb Banks Falconia Tour ! Best experience of my life Being treated like a super star with one of my Biggest rap Role models.  Robb Banks! Talking to him vibing with him and being able to perform in front of him and hundreds of other peple across the Eastcoast ! I killed every show
What upcoming projects do you have in store for this year? Winter Soulstice the Mixtape will be here in March.. And maybe even a ZTGPT3 this summer  ..but thats a secret
How do you feel about the underground scene? Do you feel as if it is too oversaturated and unoriginal? Yes i feel it’s unoriginal but that fine ..makes me stick out
What qualities about yourself do you feel separates you from other artists? Outstanding Energy u can actually feel ..and my Wordplay can be crazy ..
What was your biggest failure as an artist and how did you over come it? Really don’t look as anything as failure ..just makes u better
What advice do you have to upcoming artists who want to make a name for themselves? Stay true to who u came up with .. don’t be a bandwagon..if somebody else team is popping ..Create your own and overcome
Keep up with Zero The God on his social media, Youtube and Soundcloud at the handles and links below.
IG- @Groundzero_Wse
Soundcloud- http://www.SoundCloud.com/wrekshopentertainement
YouTube – http://www.youtube.com/Zerothegod

This site uses Akismet to reduce spam. Learn how your comment data is processed.

Keep Up With Team Blackheart!